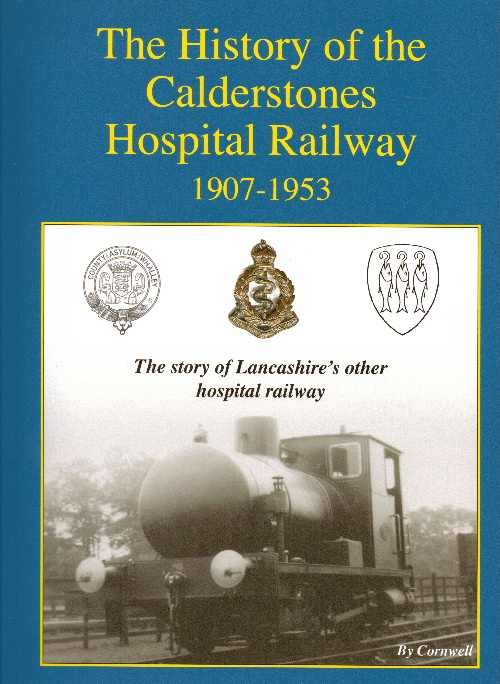 THE HISTORY OF THE
CALDERSTONES HOSPITAL RAILWAY
1907~1953

This book is about the last of the Lancashire County Asylums to be built, Whalley Asylum (Calderstones Hospital) and its railway. The new asylum was built in the Ribble Valley close to the town of Clitheroe, noted for both its castle and cement works. But there is more to this area than scenery, cement and sheep, it was once the centre of Lancashire’s institutional care, with such hospitals as Brockhall Certified Institution, Langho Epileptic Colony and Calderstones Certified Institution. These three hospitals where all geographically close together and formed what can be either seen as Asylum Archipelago or Institutional Bermuda Triangle in the latter case patients would disappear for years on end or even a lifetime. Mr Cornwell’s book is about the largest of the three, Calderstones. Not only are the hospital’s private railway thoroughly covered but its part in the evolution from a county asylum to a military hospital with 2,500 beds and then into a certified institution for the mentally deficient. Calderstones Hospital is on the outskirts of the monastic village of Whalley it was to be Lancashire’s sixth county asylum, the other five being, Lancaster Moor, Prestwich, Rainhill, Whittingham and Winwick. The planning for the new asylum began shortly before the opening of Winwick Asylum (near Warrington) in 1903. Lancashire Asylums Boards (LAB) began a countywide search for land of the 31 plots offered it was found that just one was suitable and that was at Whalley. The location on the Mitton Road the ‘Clay Fields’ so impressed the LAB that it was deemed,

‘A site in every way suitable for building an asylum’.

Looking back, the hospital has been a permanent fixture on the Mitton Road for a century; it has provided employment for the local area for decades. It is therefore surprising that the initial reaction to the building of the asylum was not one of universal enthusiasm. The opposition to the proposed asylum claimed that the cost of building on the Clay Fields would be expensive both in the initial purchase price and the health problems of living on a constantly damp site. It was said that the clay subsoil would further aggravate the ever-present bronchial diseases that plagued the county’s pauper lunatic asylums. Not only that but the nearby River Calder carried sewage and industrial effluent from the up river towns as it passed the proposed asylum. One of the lesser worries was that patients whilst exercising on the Mitton Road would terrorise passing cyclists! as they had at the nearby Whittingham Asylum. Ramblers groups from as far afield as Blackburn and Westminster complained about the realignment of a little used footpath on the proposed building site. But the main argument was that the cost of the land at £110 per acre was too expensive. The most vocal objectors to the asylum appeared to be the local Establishment fearful that the value of their houses and land would fall, they attempted to broaden the opposition by warning the locals that the village of Whalley would be damned forever with its name a byword for a county asylum. A government public enquiry was held at the Whalley Assembly Rooms lasting two and a half days and needless to say none of this cut any ice and permission was granted to build the asylum in 1906. That said, the LAB were having second thoughts about the name of the new asylum and during February 1911 it was proposed to call the new establishment the ‘East Lancashire Asylum’, at the stroke of a fountain part of the Ribble Valley would be bureaucratically transported to the land of constant rain and dark satanic mills, which may well have upset the local worthies more! A vote was held at the same LAB meeting and the proposal was defeated it was to be Whalley Asylum and that was that.

The site is close to both the Blackburn to Hellifield mainline and Whalley Station, and from the beginning plans were drawn up to lay a private railway from the Clay Fields to join the mainline. The new railway would save up to £8,000 in the cartage of building materials and £500 per annum once the asylum was open. An agreement was signed in 1907 with the Lancashire & Yorkshire Railway Company to establish exchange sidings at Barrow for the exclusive use of the asylum. The sidings were officially called Barrow Sidings; and had their own signal box with 16 levers operated by an employee of the railway to control the points and signals on the mainline. The Mitton Road passed over the railway on a skew bridge; the original bridge was to be an elaborate structure with wrought iron railing five feet tall, it remained on the drawing board to be replaced by a simple utilitarian structure without the extravagance and safety of the railings.

The high water mark of the railway’s activities was during the Great War when the yet to be opened asylum became ’The Duke of Lancaster’s Military Hospital’, which was quickly renamed ‘Queen Mary’s Military Hospital’. The renaming was due to a combination of military arrogance and incompetence at Windsor Castle. At the opening ceremony the administration block’s main doors were opened with a 22 caret solid gold key, provided by both the architect and builders, and paid for by the ratepayers. The locals rallied round to help the servicemen with 70 people offering to drive convalescing soldiers around the area or at least let their chauffeur do it. The railway had been built with an exceptionally tight bend and with the introduction of ambulance trains the six-year old railway was relaid with new track and the bend from Barrow Sidings eased. Two separate stations were built to unload the sick and wounded from ambulance trains that had travelled direct from the South Coast. The book records the arrival of ambulance trains during the Somme Offensive when the first train arrived on the 4th July 1916, three days after the attack began. At least 18 ambulance trains arrived from the front during the campaign with sometimes two in one day. With so many surgical operations being carried out the Lancashire boilers also doubled as improvised crematoria for amputated limbs. Soldiers would be put on an ambulance train and sent to any destination in the UK irrespective of where their regimental base. 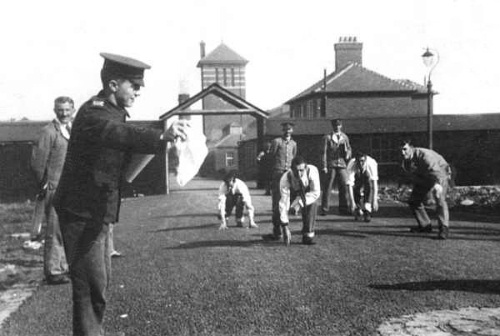 All in all 56,800 Allied servicemen were treated from 14th April 1915 until 31st June 1920, for those that died at the hospital a separate military graveyard of one acre was established by the side of the hospital railway. The civilian patients had their own cemetery of two acres so avoiding the problem of multiple burials in one grave. Those suffering from shell shock, battle fatigue or as it are now known post traumatic stress would receive 100% disability pension, but the Ministry of Pensions would do their best to try and prove that the patient’s mental illness started before his military career and therefore not need to pay a pension, Britain was indeed a land fit for heroes. Post war the Lancashire county asylums at Lancaster Moor (107), Rainhill (204), Prestwich (292) or Whittingham (134) housed the military psychiatric patients where they often remained until death. Here they would be classed as private patients and wear lounge suits in various military shades of cloth. After the Great War the new patients of the Calderstones Certified Institution for Mental Defectives would be put to work scrubbing out the bloodstains from the wooden floors, one patient spent two and half hours on one stain and got nowhere, possibly a reason why he was in the institution in the first place.

The A4 size book with its 136 pages covers the history of the railway along with the arguments over the building of the asylum with descriptions of the initial plan and the final buildings. Two chapters follow on the construction of the railway and the contractor’s locomotives. Followed by a chapter about the powerhouse and its four coal fired Lancashire boilers and their conversion to burn creosote pitch and later the building of the gasworks show how self-sufficient the hospital became. The Great War forms a separate section with the establishing of the military hospital along with the relaying of the railway, the two military stations, ambulance trains and problems with graveyards. Post war there is the ‘temporary’ change over from an asylum to a certified institution and the beginning of Calderstones. The book tells of the ill fitting military uniforms that the institutional patients wore, the various jobs they carried out such as, unloading railway coal wagons, rug making, farm work, cleaning the wards, escape attempts and much more. Then there is the history of FARNHAM SLADE the institution’s fireless locomotive that served from 1925 until the closure of the railway. Finally, fall and decline of the railway and the scrapping of FARNHAM SLADE with its ‘boiler’ (reservoir) placed in the powerhouse as part of the hospital’s compressed air system. Inside the book are over 83 photographs, four maps one of which is a centre page spread of the hospital estate, architectural drawings of the power station and railway bridge with almost 60,000 words all printed on glossy art paper.